It’s worth saying: the airlock, spinning, floating away — all manufactured. I had none of that yet. To record this I just held down the ‘back’ button and the ‘spin left’ button until it maxed out. As I recall I had mechanics for spawning objects on the walls, and movement controls for accelerating. It was extremely bare bones. Some of this I made eventually. I never quite got to making airlock decompression though.

The controls were ‘WASD’ to control movement on a horizontal plane, with ‘C’ and ‘Space’ for up and down. ‘Mouse’ for two axes of rotation, and ‘Q’ and ‘E’ for the third. I built movement on physics because I wanted to bounce around a bit. This was the basis for a majority of the mechanics, and also the problems during development. 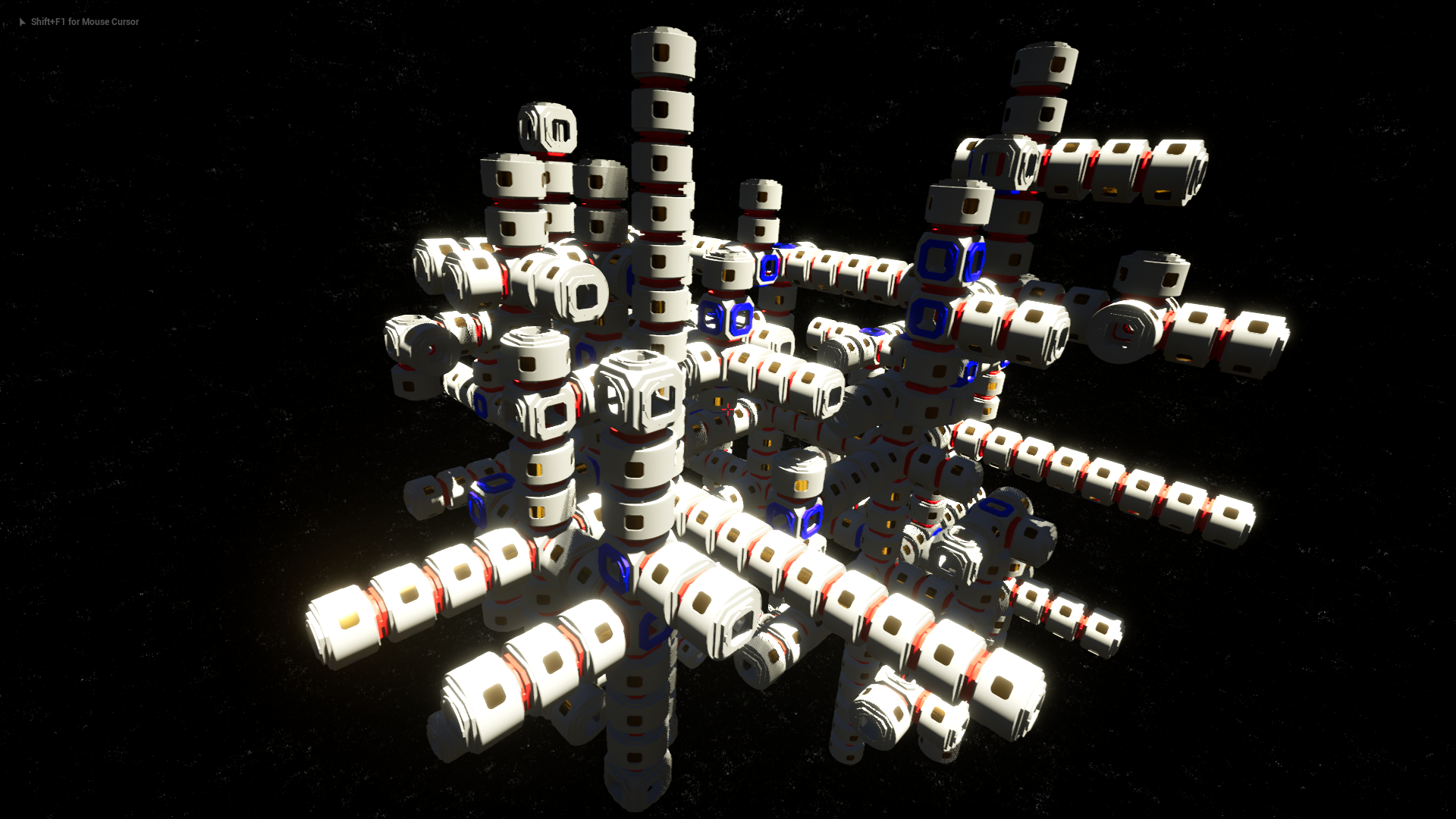 On July 7th 2017, I uploaded this video of the current state of the game.

The rough concept here was that you were on your station, and you could send out your drones to pick up supplies from neighboring asteroids as they passed within your range.

The drones had a docking port to return to and carried a cylindrical container for holding ore. I figured it worked like ice core drilling, but with lasers. They’d disappear from your view and then come later back with resources.

Some of these shots are my favorite from the whole project.

Early on I hadn’t quite figured out waypoint pathing for the drones, so if their flight path intersected with your station, it would just hit it and ping off.

I figured it would have a construction timer and a visual effect of a form-shaped curtain over the in-progress build.

This was a prototype of a base building tool I was considering using to generate new rooms on the station.

You load it with resources and plug it on a door connector. Then it would enter building mode, you’d select the module you wanted, and it’d build it.

I didn’t really like this for bigger constructions, and was thinking of adding a ‘large construction’ module. I hadn’t worked out how you got it yet. I didn’t want to put that much responsibility on the drones, since they were not very smart and could easily get stuck.

The constructor tool didn’t work out in the longer term because the loading of resources was fairly cumbersome and had to be repeated for each material type. I didn’t come up with a good solution to that. Much later, I considered pneumatic tubes as a resource transfer option.

Things were going really well at this stage. I hadn’t hit any real roadblocks yet.