We’re jumping ahead over a year now. A lot of things changed in that time, and I was not great at documenting this. I think it was partially because I had thrown out a lot of work, to improve on the concept, and it’d been mostly broken for a while. 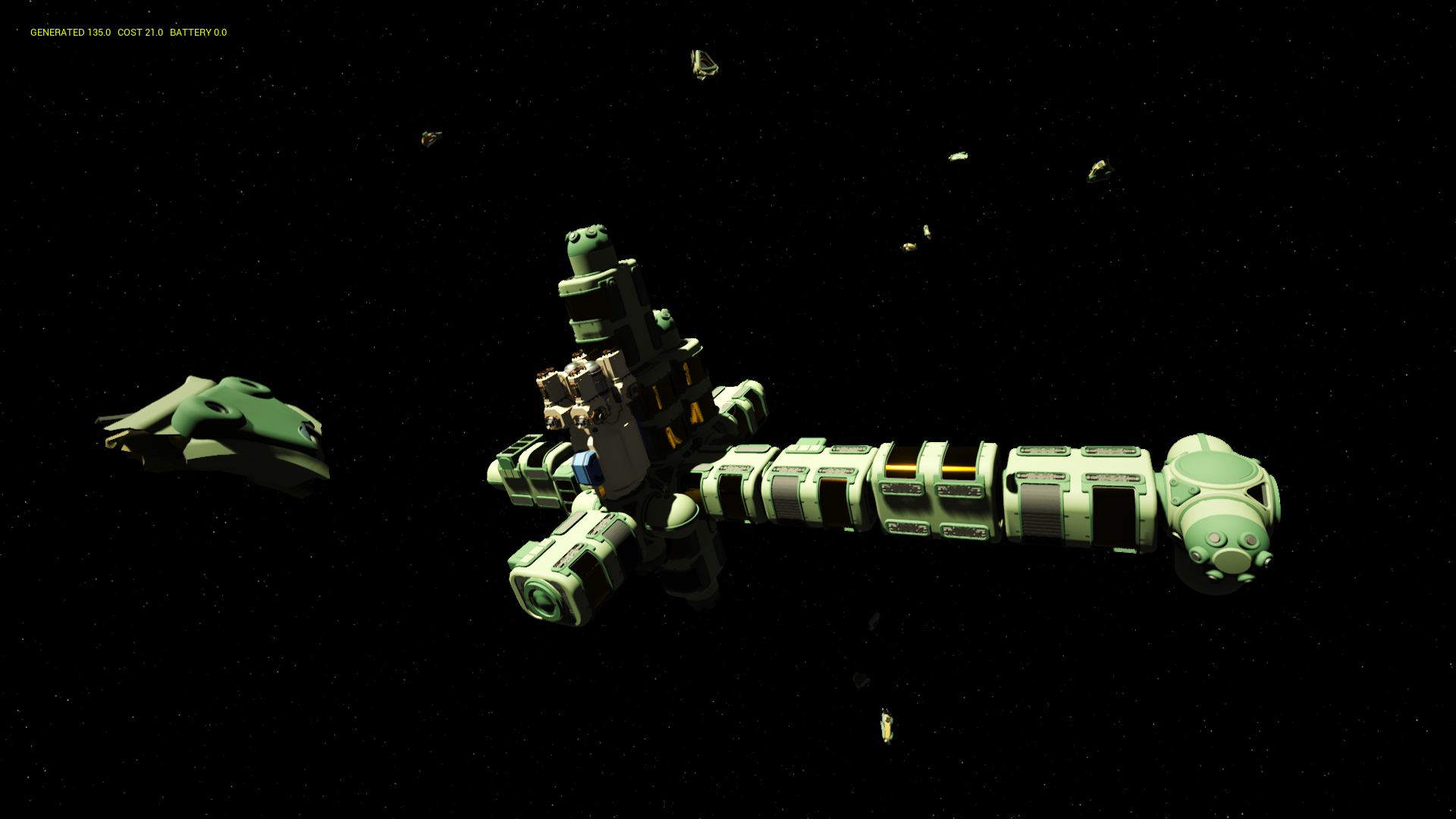 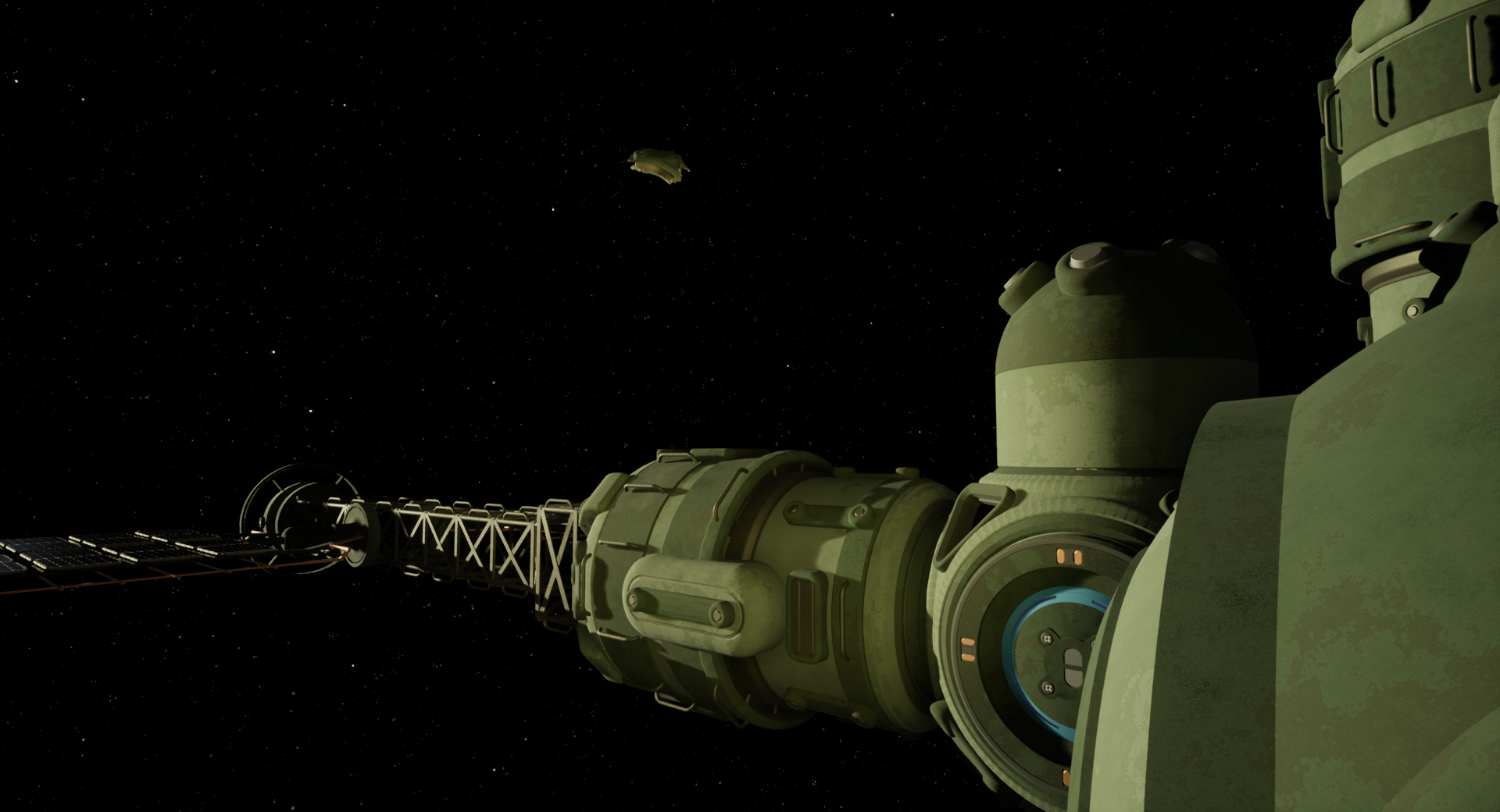 A story was growing in my head to explain how I could have an unlimited supply of space station debris to explore and harvest from. Suppose they were building something like a dyson sphere, around a water planet (typically dyson spheres go around a sun, not a planet) that had extremely deep oceans. Say they build the sphere around that planet because they needed access to large quantities of water, for cooling maybe? Doesn’t matter. It needs to be a water planet though.

They are building this massive structure in orbit, but disaster strikes. The sphere breaks up, and spreads an impenetrable field of metal chunks all around the planet. Nothing can take off, nothing can land, no radio waves can breach the cloud. This spacefaring society cannot launch a rescue mission, and naturally assumes that no one will survive long on the surface installations. So they abandon the planet.

Meanwhile a group of workers manning a floating platform are cut off and doing their best to survive. They form a new society from what little they have, and a culture of fishing the non-terrestrial oceans.

They have no means of acquiring new materials to use, so for a long time anything you can build with is precious. They use advanced 3D printing, so nothing goes to waste.

Over time the debris field starts to organize itself into a ring, as most do, and this opens up a clear path at the planet’s poles.

The best way for them to get building materials is to use a limited amount of what they have, make a rocket, and send someone up to get it.

Initially I thought the player might be the first to go up, but overtime I figured that would be excessive pressure, and annoying. it would be better if they were part of an organized operation that had to work somewhat independently. A small fleet of solo scavengers, with a central hub they send resources to.

As the concept of their society grew, I started imagining them more as an extremist militarized dictatorship. They had formed in a period of disaster, which would lead to intense rationing and aggressive laws. After so many years in isolation I figured they would have their own mythology and warped history. 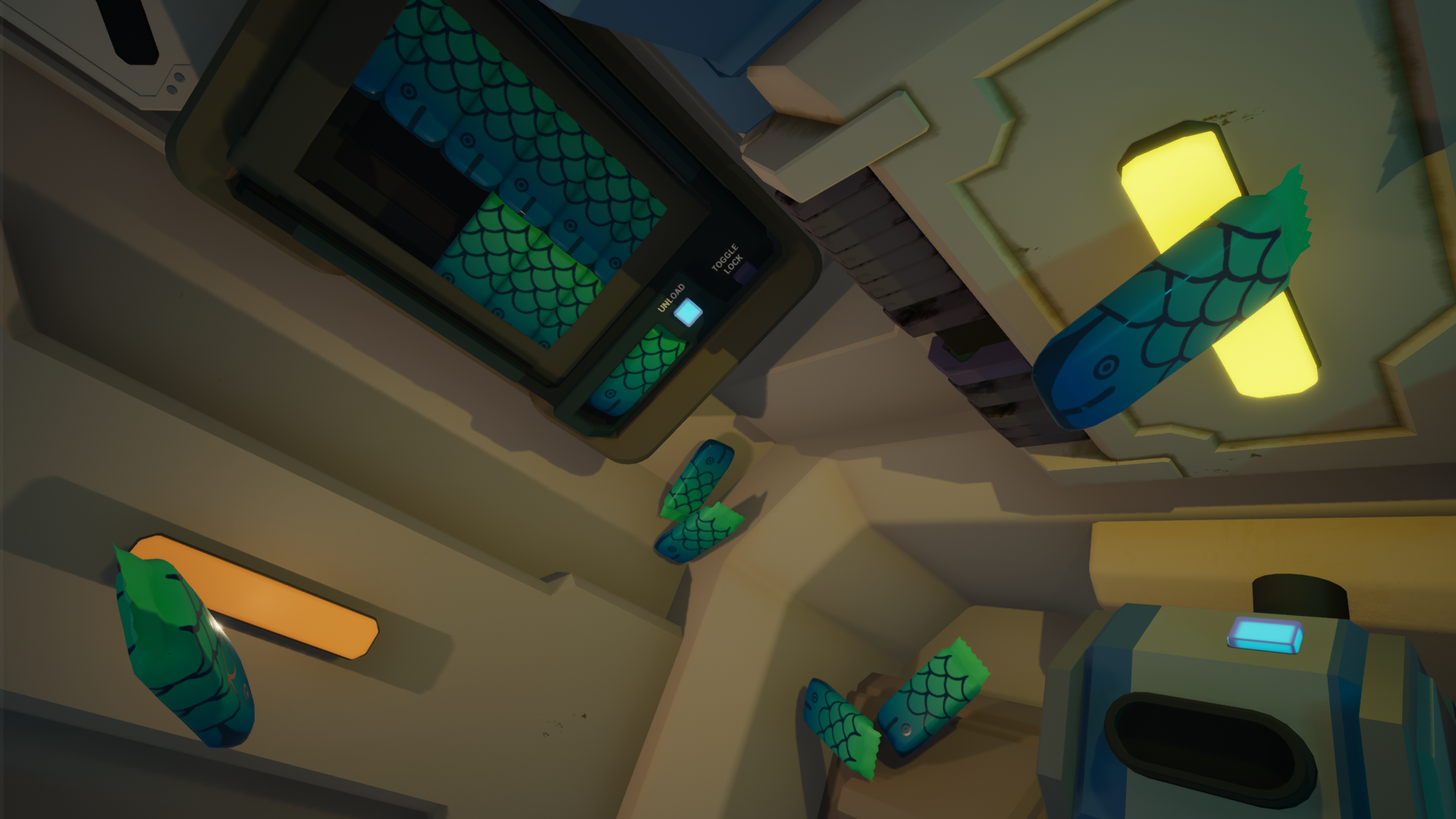 I started making props with fish and water motifs. The player ship and the survivor technology became angular, printed, shapes in whites and blues.

The stations in the debris field were from another civilization, utterly different. So I chose an opposing theme of smooth, rounded forms in dark green and brown.

I decided the floating city on the surface was divided up by levels, the top most section being the ruling class, admirals, the wealthy, high command. In the middle were the working class, people with just enough to feel ok. And on the bottom was the Gutters, a place half flooded with salt water that houses hot, loud and dangerous machinery, water processing, fisheries, sewage treatment. A large portion of the population lived there. I had yet to overtly state this anywhere in the game, but if I’d had time it would have been delivered to the player in a slow drip of clues. 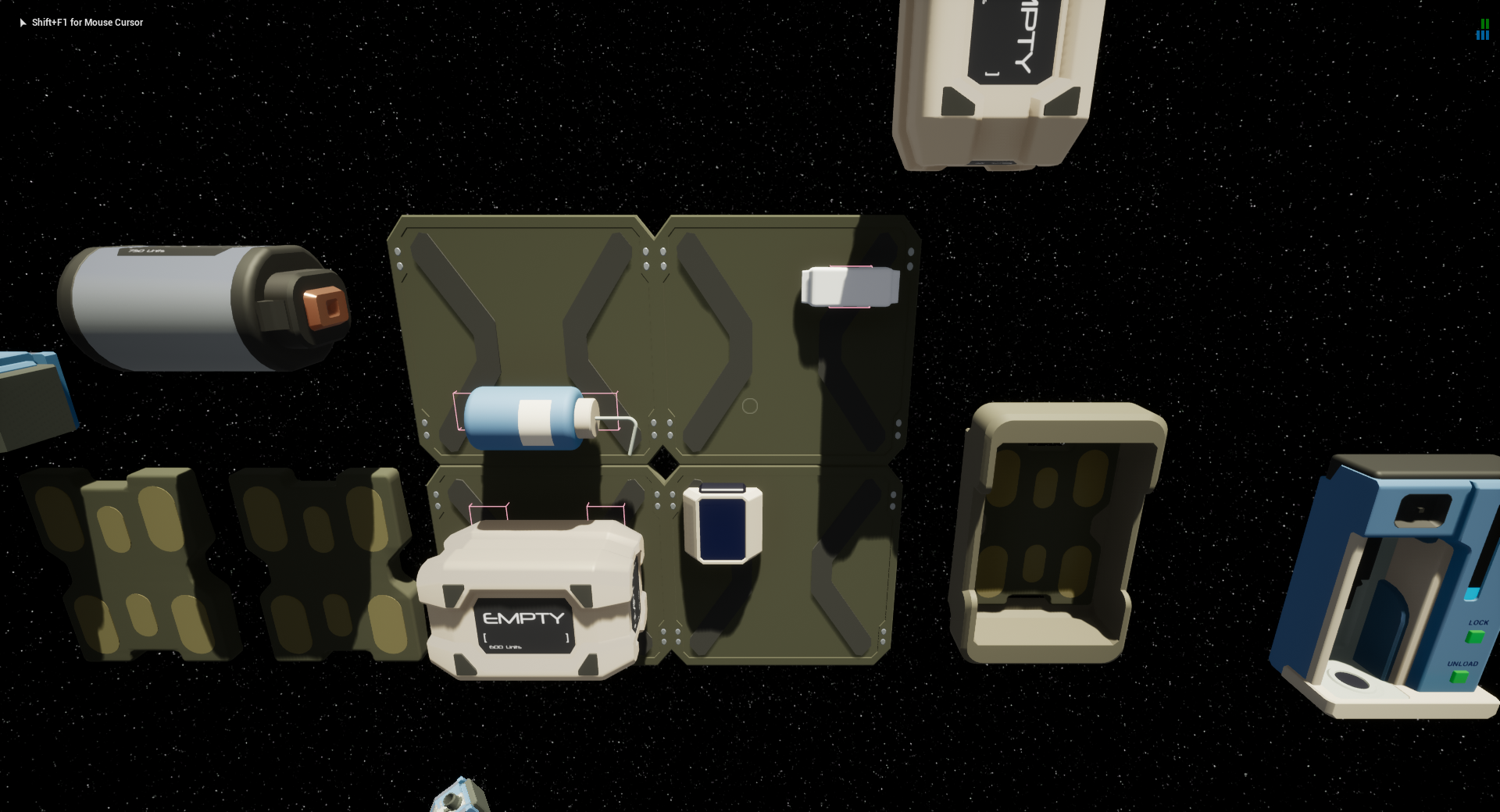 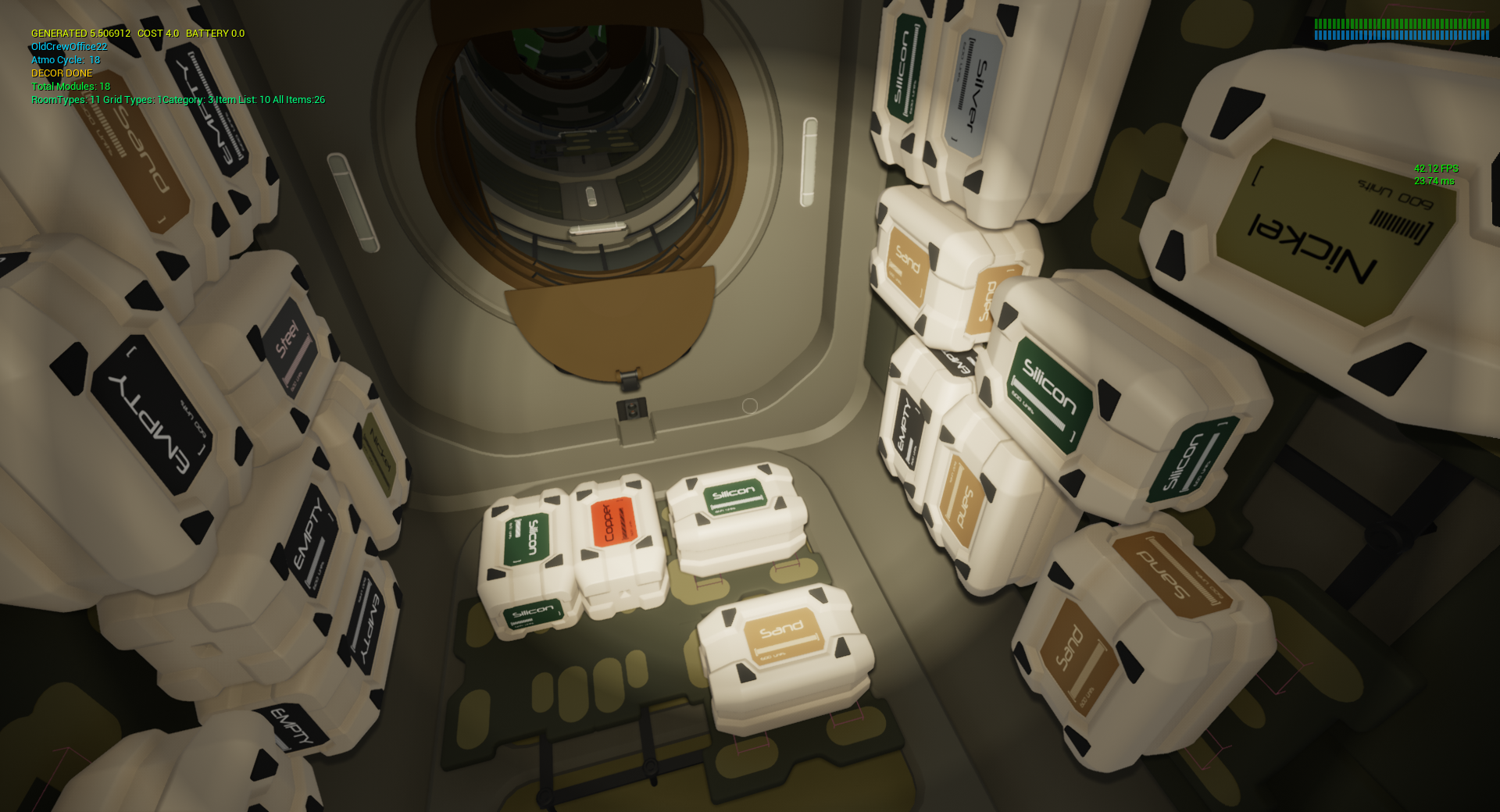 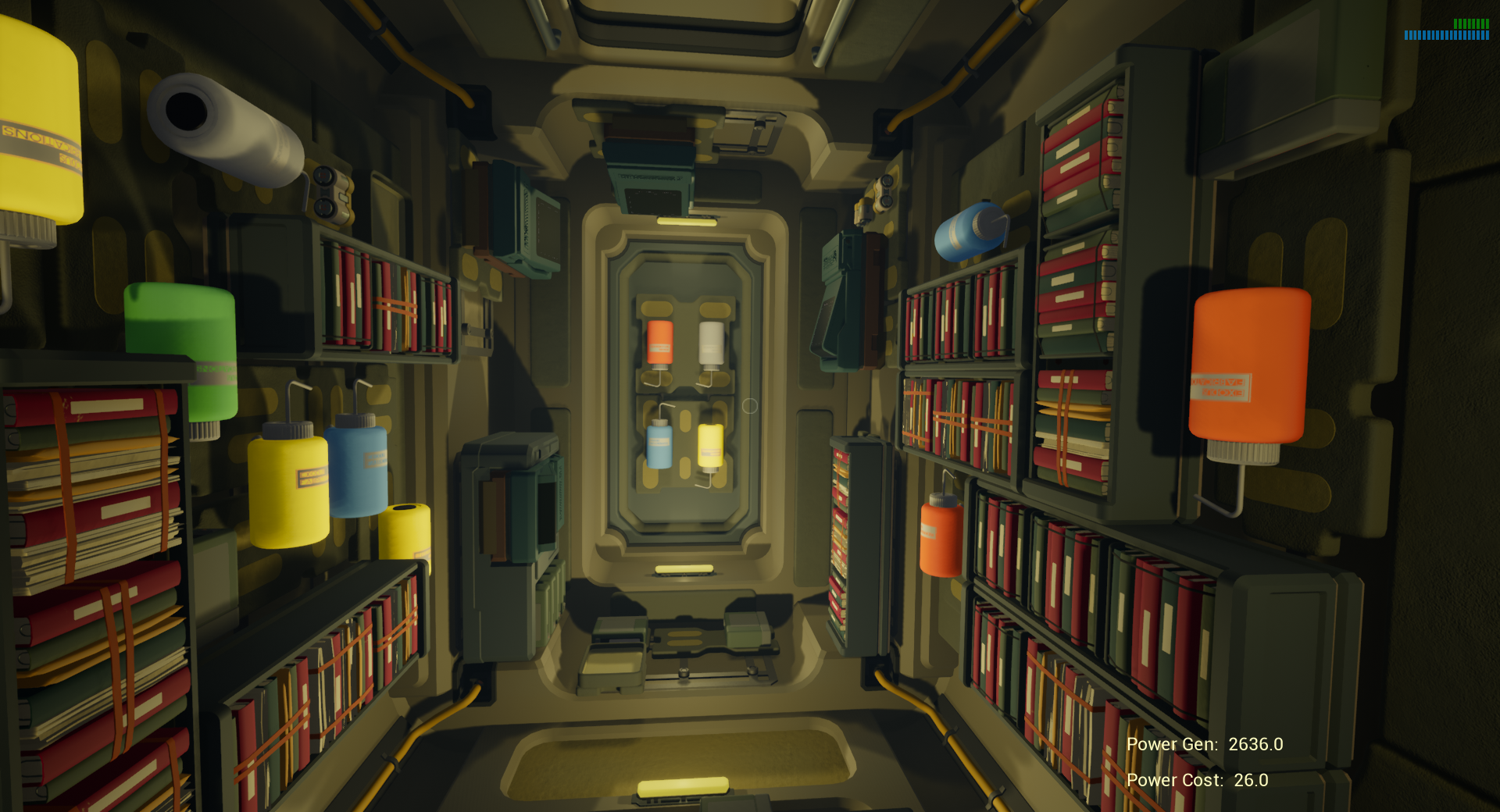 Initially I just had square, item-sized, adhesive patches on the walls. These were one of the earliest additions to the game, though could only hold one size of item at the start. I figured it was all physics-based, and I didn’t want to add an inventory system (unrealistic storage of mass. Illogical), so I would want a way to organize and hold stuff in place.

I was manually placing rectangles as reference points and plugging in the values and indexes of every single size to a corresponding node. To be fair, I probably could have done a bit of math and saved myself a headache, but I was pretty rusty there too.

A good deal of my methods were excessively crude and hacked together in the worst possible way. 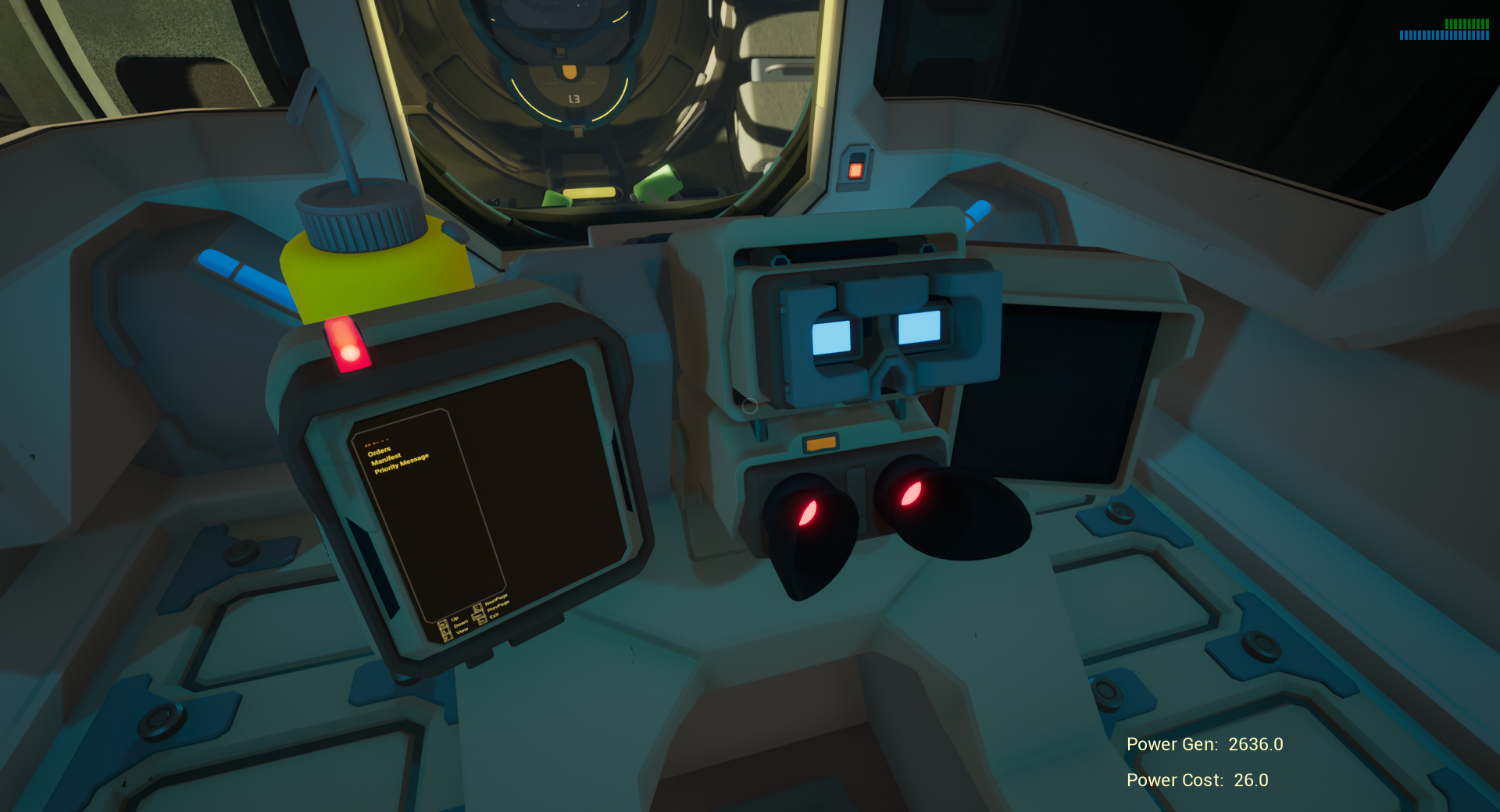 I wanted the survivor city to have some influence over your choices, and to expand on the larger world in a way I felt was a relatively effective use of my time.

I thought I might give the player a quota of material resources to send back, this would be rewarded with tokens that could be exchanged for specialty resources which weren’t available for the player to find. This would have been tied to the drones, but I had never reintegrated those into this version of the game, so I never got around to this.

Part of that issue was I hadn’t figured out where the drones would go since the different derelicts would be unloaded from the game engine each time you moved to a new one. Saving and loaded ended up be a difficult issue that I didn’t tackle until much later, at which point I had other issues on my mind.

With the player station gone, I now had to have a mode of transport between different derelicts. Based on the drone system I made an autopilot ship you could take between different procedurally generated stations. It had a door on the front that allowed it to dock with common door sizes, and I made sure there was at least one open lane (a sort of spawn exclusion zone) to reach that door when I generated a new station. 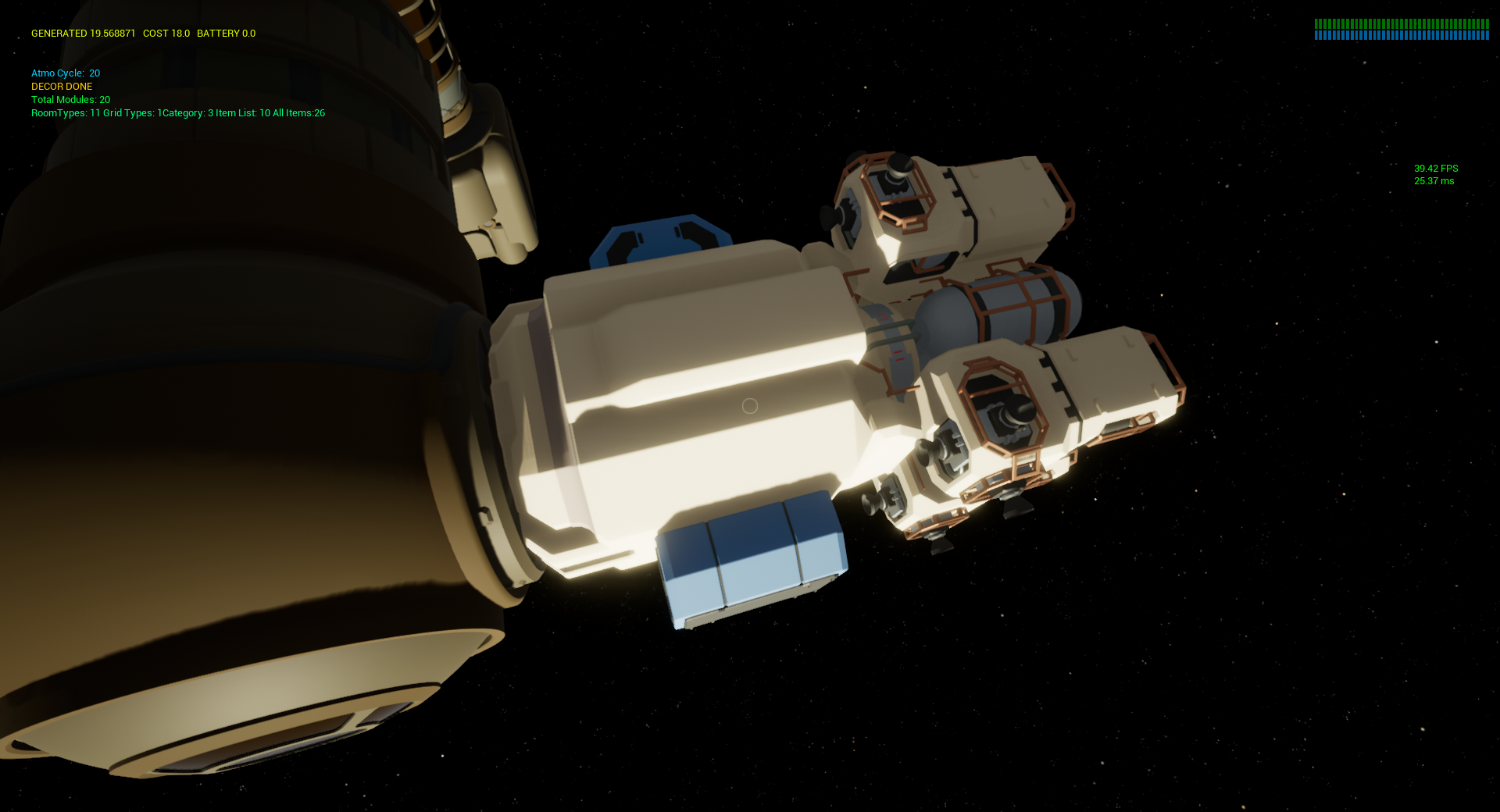 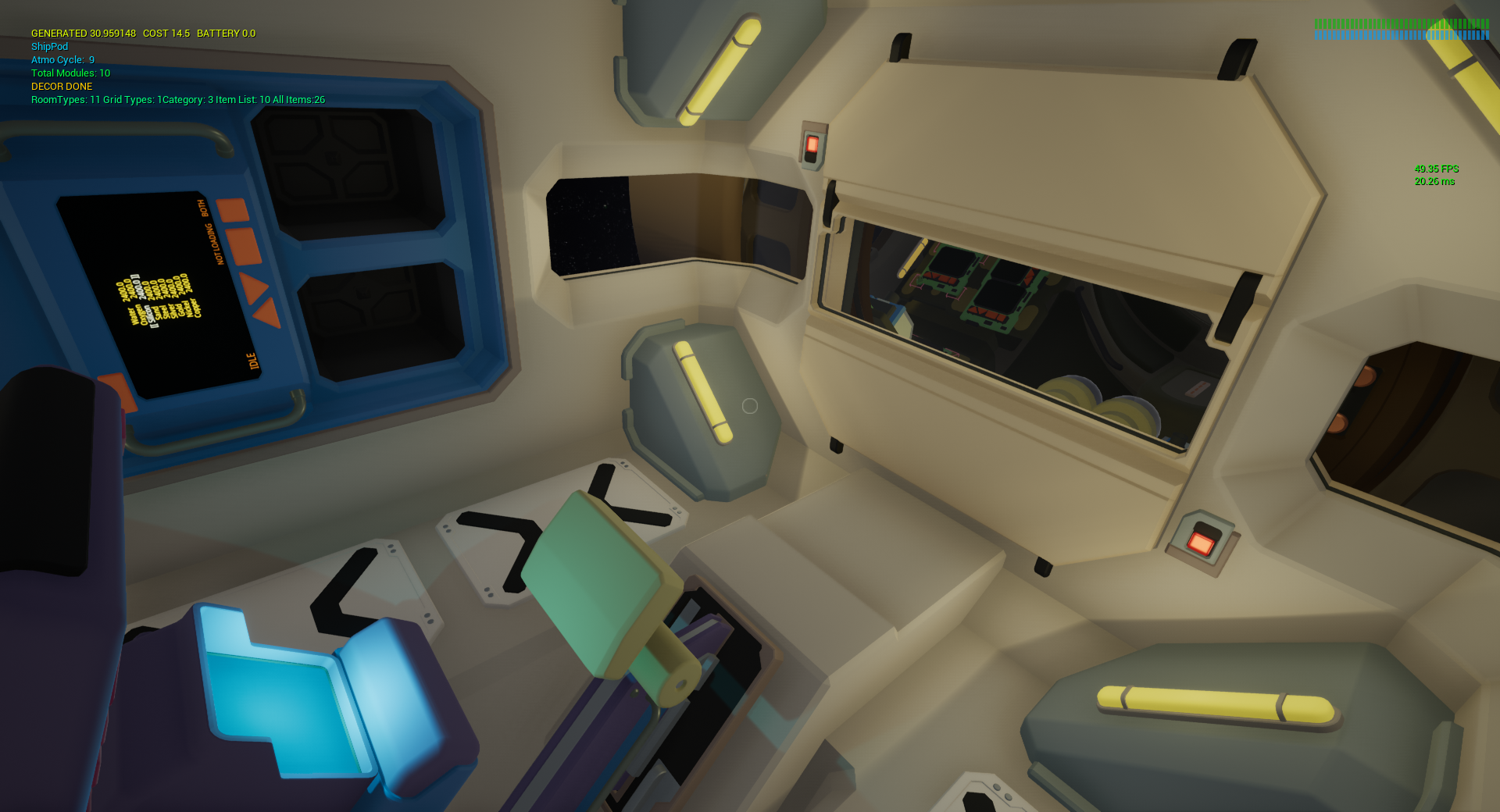 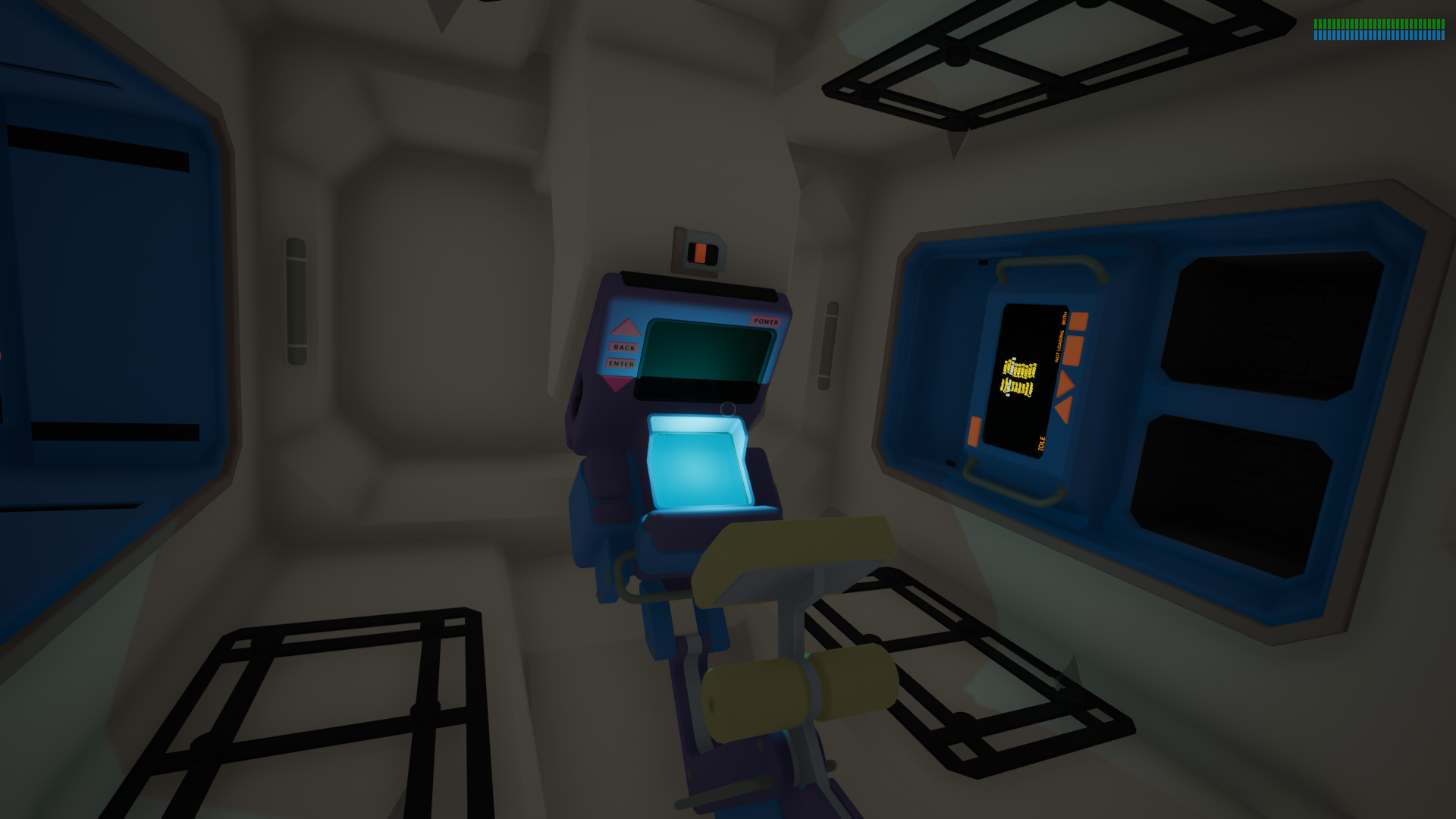 The ship went through several iterations throughout development. From the initial ‘Command Module’ in the earliest video (technically still a station module), to the earliest version, which still had the construction points for the blue, 3D printer sized ‘addons’, used in on the player station, and a pilot seat/computer screen that faced backwards for easy access to the door. The ship had multiple attach points along the inside for gear, lights, resources and batteries. 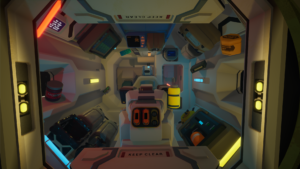 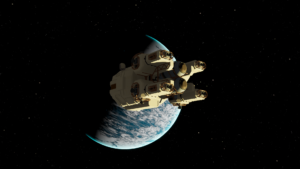 Pretty soon I removed the addons (no more construction tool), and changed out the old chair for a more integrated seat with more controls surfaces. I figured batteries would play a role in a number of tools and systems until a permanent power source could be found. So I added a charge port right on the front of the main console.

It also had a 3D printer installed above the pilot seat. I wanted to have a level of progression attached to the printer. I imagined as part of the intro, their ship would have a power surge and fry a row of chips. They would have to go find rare outposts constructed by other scavengers for the city. Which would each have a single chip. This would unlock blueprints.

We’re not even at the new ship (or the new-new ship), yet! I am entirely sure I would have made yet another at some point.

Reminder: Always make the function before the form. If you have to make the form, make as little of it as you can. Once it works, you can wrap it in whatever you want.* 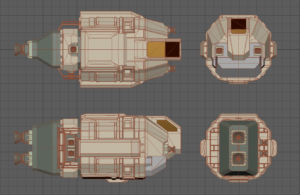 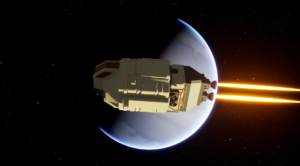 *to be fair to past me, I was hoping to generate some attention on social media to get people excited for this and maybe get the project funded. It’s a real chicken and egg problem.