Inevitably, when creating a survival sim you realize that some resources (like food) will need to be replenishable.

In a way, every survival sim is a resource manager. If a resource is too abundant, it becomes worthless, even annoying. Excess trash. Does your game have a way to destroy items? Do they have alternative uses, like for fuel, or substitute building material? 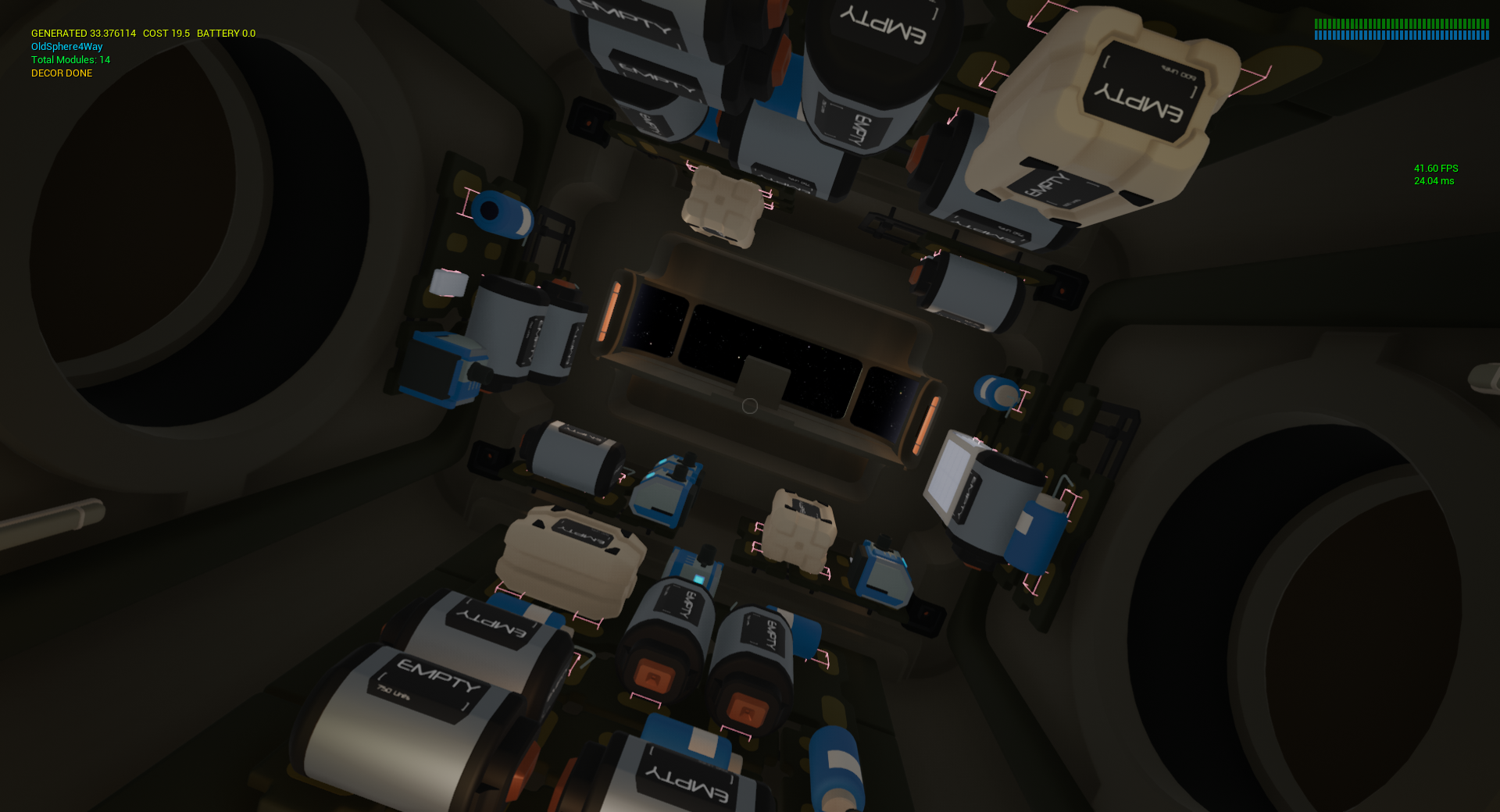 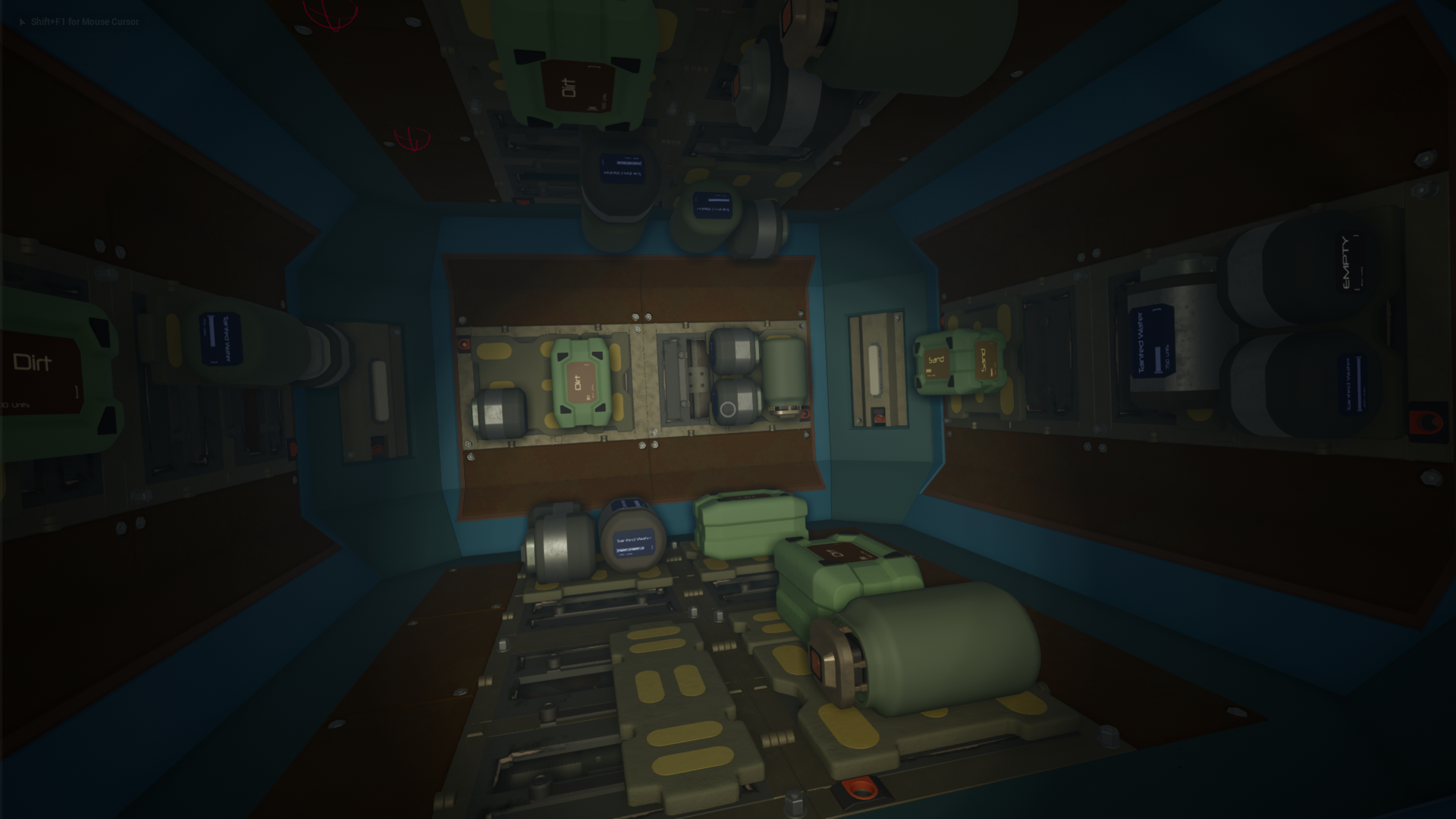 Alternatively, if a resource is too limited it can make a game unplayable. Say your game requires a tool to perform the primary game loop, but the tool is constructed from a non-regenerating, limited resource, found in the world. That means that every world has a finite, limited time that you can play it.

Ok, so make the world infinite! Nothing can be finite in an endless world. True. Technically. But the outcome is not what you might think. As you play, you will find that you will be forced to travel further and further out from your territory to get the basic materials that allow you to continue playing the game. Over time a basic tool will become precious, and too costly to use. The prospect of having to go out again is too much to continue. The game has become a chore.

The point is, if a player can stay in a space for an indefinite amount of time, with resources that degrade, or are consumed in use, there has to be ways to get more.

For RO, I didn’t want the player to stay in one place too long. The whole point was that resources are limited. I’d intended for the player to be forced to move on from their current station into another, when they ran out of useful supplies. They would have to choose carefully what they wanted to take and what to leave behind.

This meant that they couldn’t have a permanent base, and for the most part this was how I wanted it played. In the future I was thinking about how to add features for intentionally regenerating resources, like farming, but I didn’t get that far. 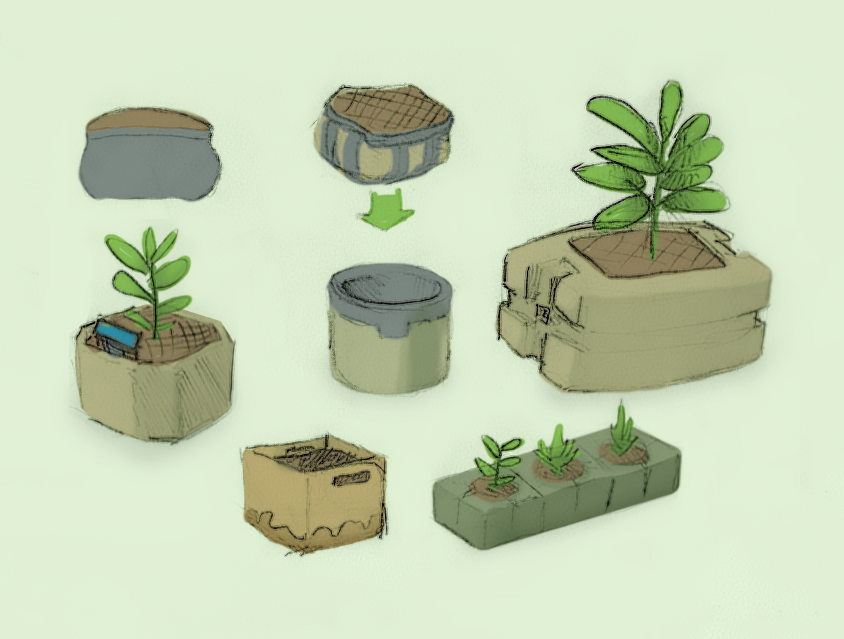 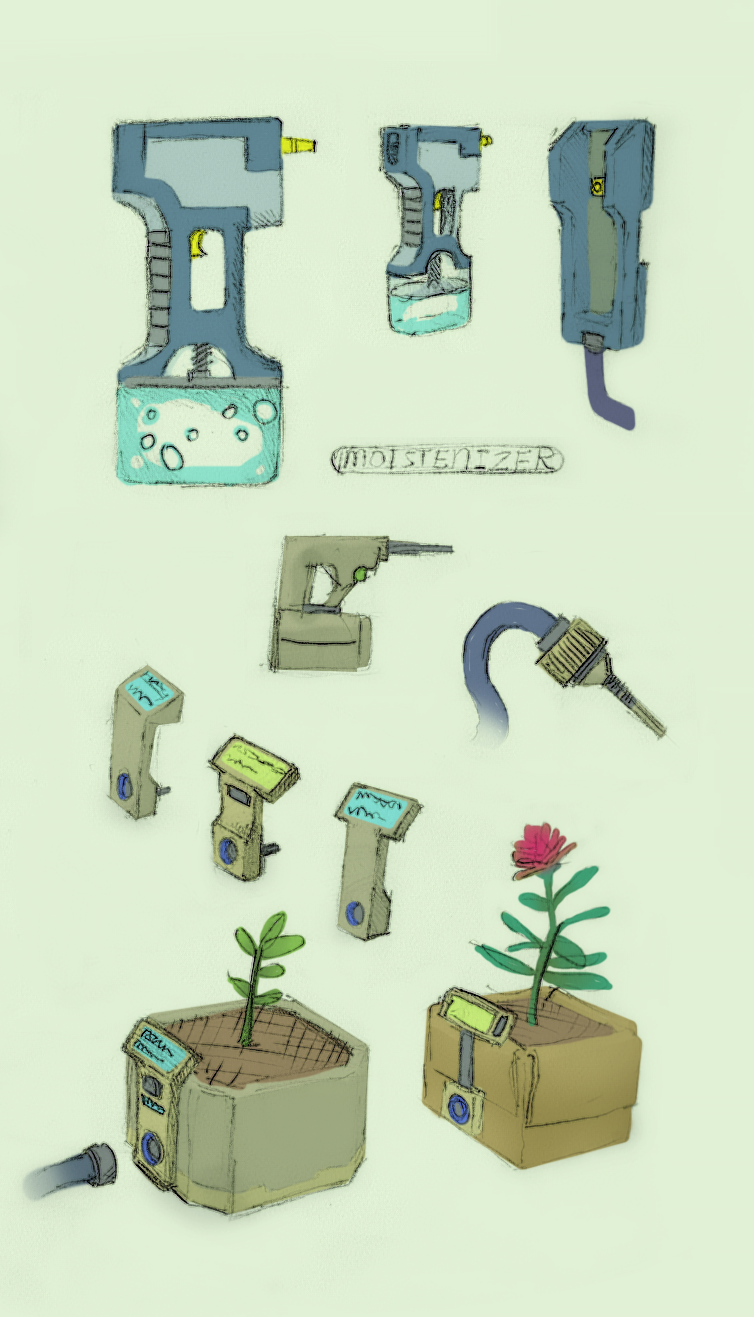 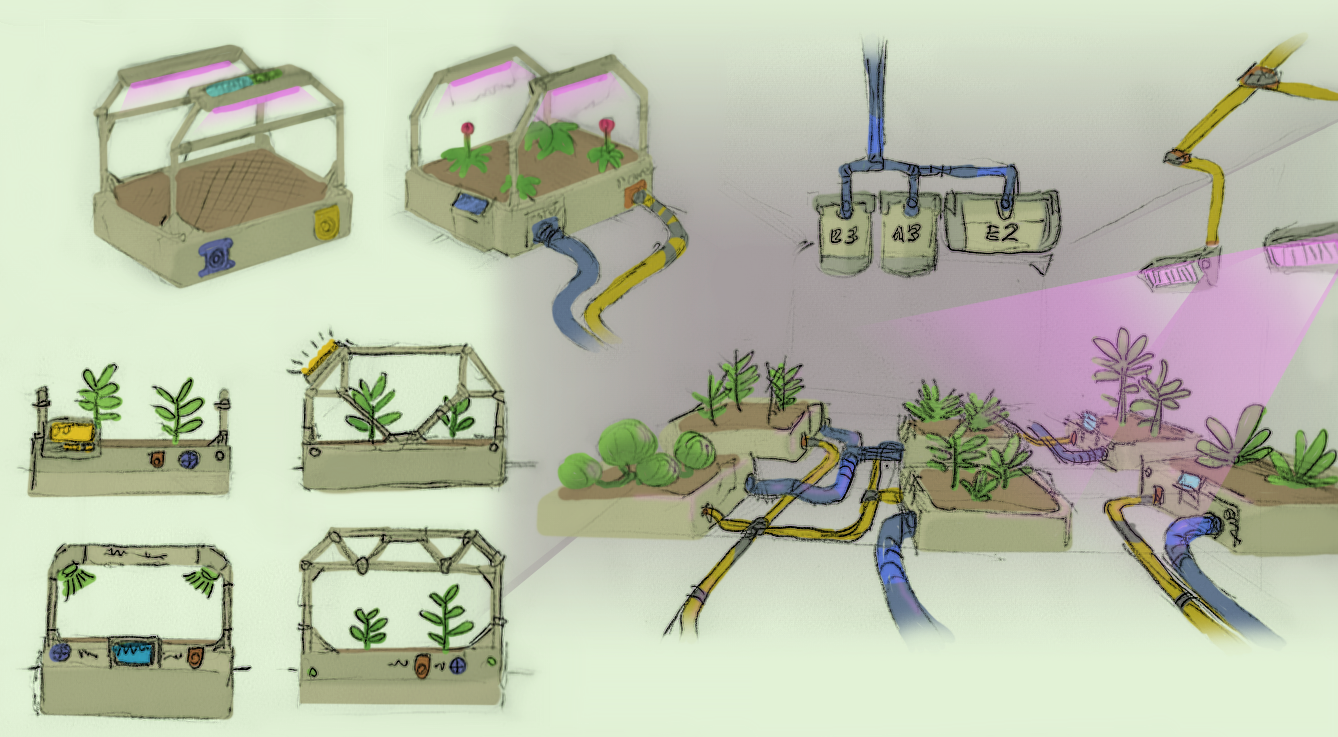 The main issue here is scope. to get this working I needed to add a number of new things. Arguably farming would be as difficult or possible more, than power management. For one, I wanted to give farming its own version of the conduit, and I’d started to add a blue version for water, but I was running into problems. 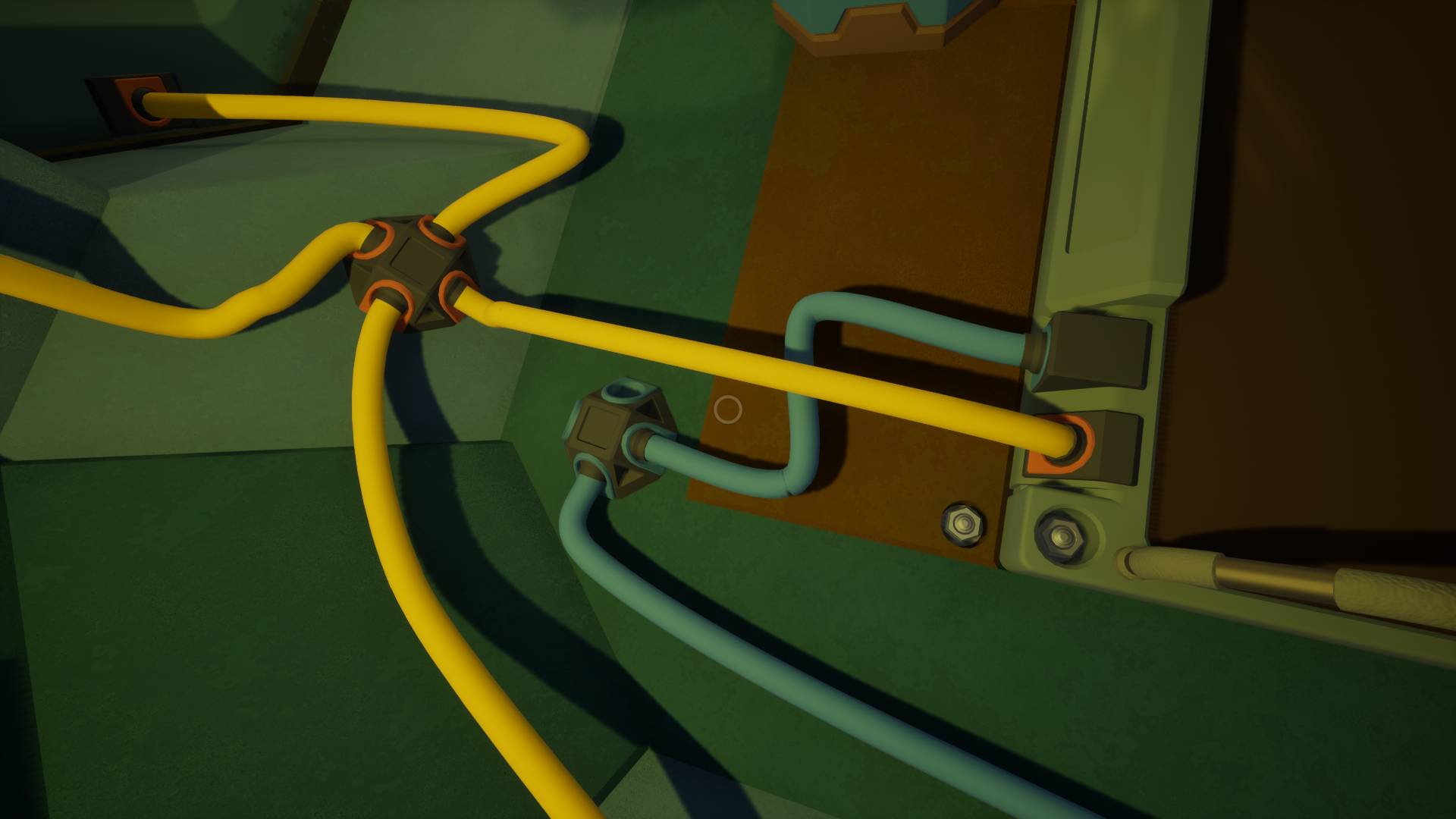 For one, procedural generation was already a cumbersome mess just generating power conduits. If I wanted to add transfer tubes for liquids (or gases), I would need to overhaul large portions of the code and the models, to allow space and exceptions for this.

The issue was that the conduits didn’t detect a difference between each other. They were all just links. So now I would have to make them a type and disallow links between them.

I would also need a separate network with MORE nodes, when I was already sick of setting up the ones I had. 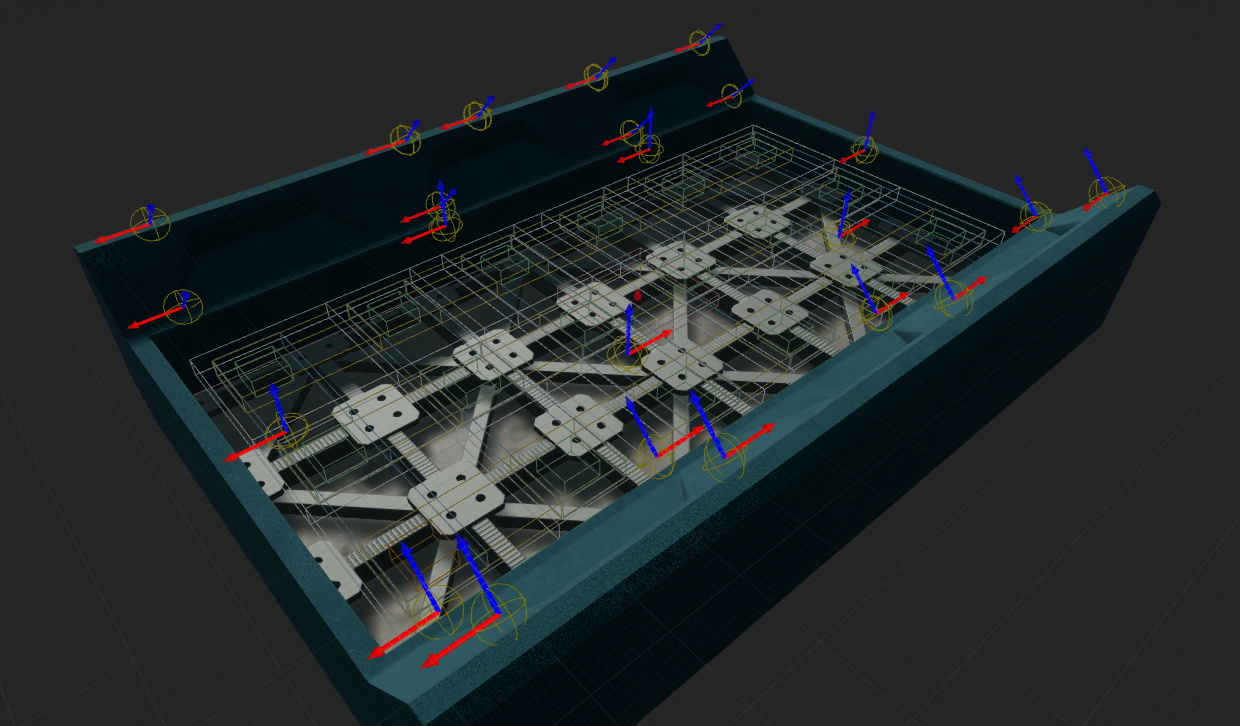 On top of which, I had no idea how I was going to handle pipes containing resources. What happens if you break the link? Can it spill out? Can I make real-time fluid dynamics? What happens if you mix different resources in the same pipe system? Does it need to know the difference? Complicated. 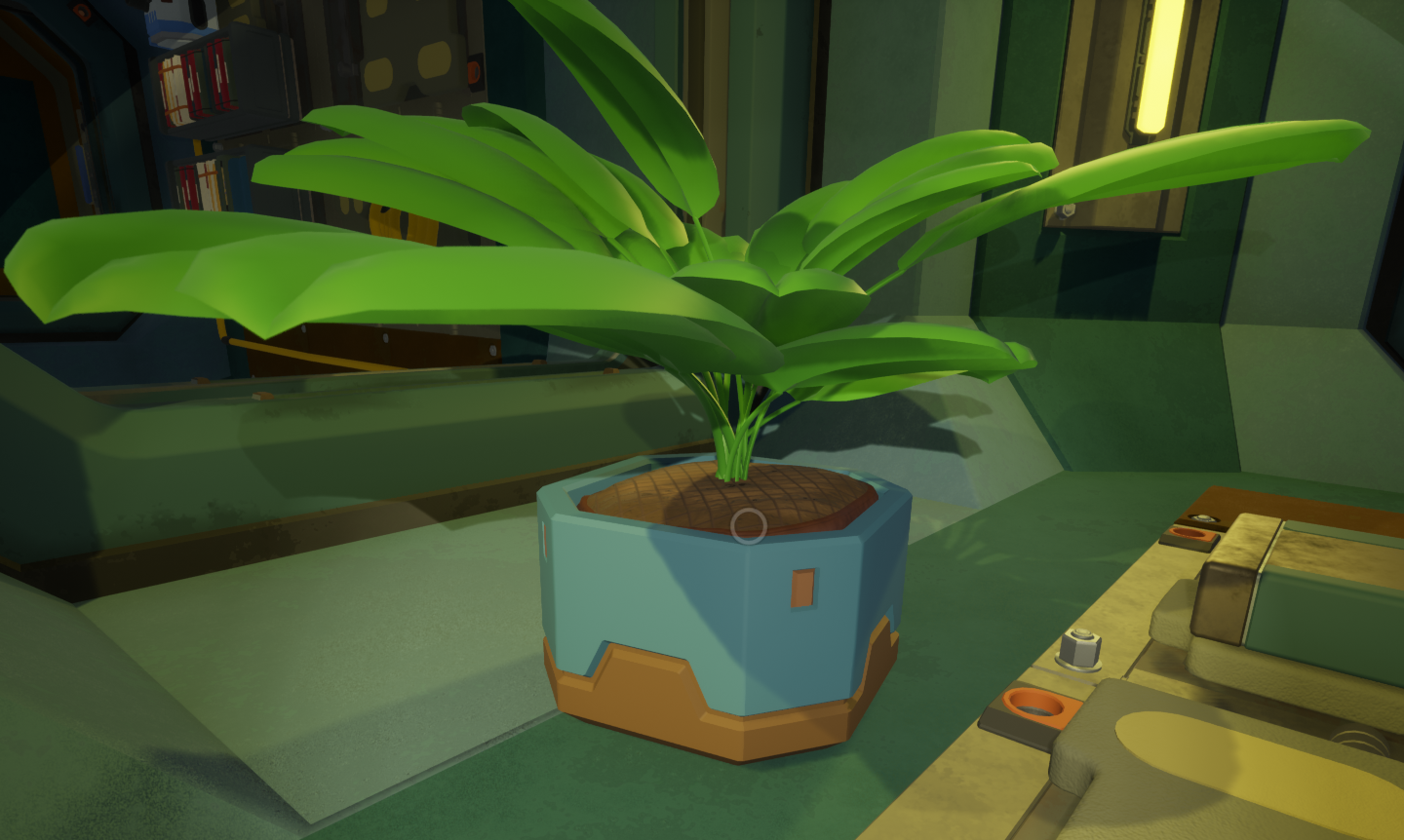 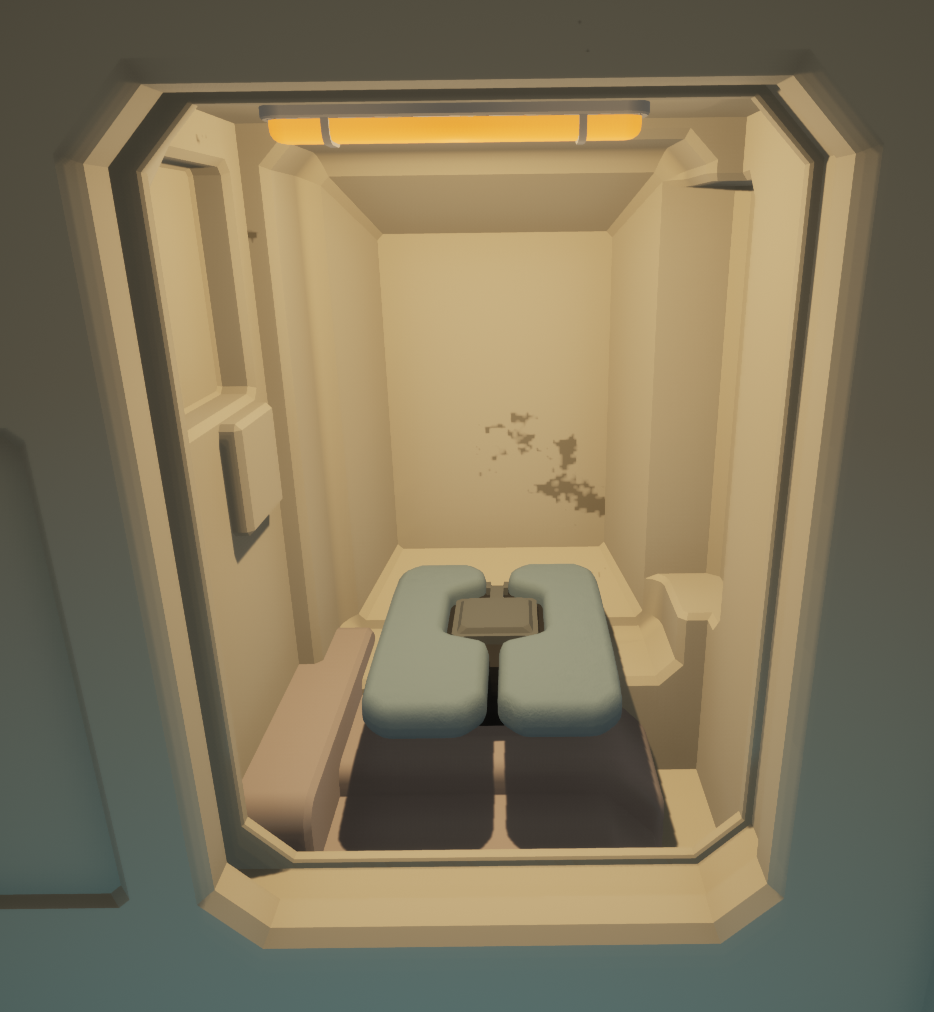 Back to farming: I was seriously considering compost and fertilizer (I added a space toilet) as a resource. I hadn’t quite decided if I wanted the toilet used to be part of the gameplay. I kind of figured it would be a secret stat that got added to the ‘toilet storage’ when you weren’t looking.

This is how I was dealing with the idea that all matter on these stations was finite. I think this is an excellent example of how I took things too far. I was considering soil, oxygen and air moisture in plant growth. Byproducts, like fruit, that were taken from the plant would have to be accounted for. See? It’s entirely too much.

When I imagined the growing process I figured I’d build subcomponents for each leaf and stem, for ‘variation’. Honestly I’m glad I never got to this because it was a terrible idea. It would have been an unreasonable number of timers and background operations going on.

One of my more outlandish ideas was to add bees to the farm mechanics. Without some form of pollinator, it didn’t make sense to me that the plants would produce fruit.

I figured I would base the concept loosely on the power network system. A hive in one module will attempt to find plants in neighboring modules. If successful, they would pollinate those plants and generate honey. Then all I would need is to generate bee particle effects in those rooms.

I had an idea for a quest-giver AI that would represent themselves as an animated Asterisk with eyes. I was thinking, a sea urchin of some sort. I thought this AI would communicate via the message system in your ship. Initially you might get cryptic or garbled messages, but eventually they would start conversing with you and request that you go to a specific location and find a part, or turn on a machine, or some such. These actions would accumulate into eventually locating a ship capable of taking everyone out of this system back to civilization.

I don’t know if this would’ve worked, but I still like the thought of a friendly AI with a whimsical identity.

In my wildest imaginings I saw a storyline with three potential outcomes.

In theory, these wouldn’t be exclusionary choices until much later. Eventually there would be conflicting actions that would lock your allegiance into one outcome. This was a concept I never got close to, and I think by then I recognized it was not possible. The issue with projects like this, is the longer they go on, the more cool ideas pop up. It’s important to properly diagnose the daydreams as such.

I was experimenting with a complex system of atmospheric margins, heat, cold and nutritional factors. I wanted it to be somewhat based in reality, but I can tell you, a good deal of it was way over my head. I managed to make a loose system that had stats for the various food resources. I didn’t just want it to be a timer, so I tied it to movement. The amount of force you used to move directly depleted the food resource stats. Once one of them is depleted, you start to die.

I should have started this much sooner, or possibly excluded it entirely, if it didn’t serve the gameplay. It was complex and easy to get wrong. I think part of my reason for wanting death mechanics at all was to justify making food items. I really liked the food items.

I didn’t have the values right yet and food was extremely abundant. Ultimately it was a moot point and required a major rebalancing at some future time.

I was trying to add only things that had some useful purpose to the player, and it turns out it’s really difficult to make interesting environments out of only things that will always be of use to you.